Cannabinoids to Know Besides THC and CBD

Cannabinoids are plant-derived compounds with a vast array of unique effects. Learn more about some of the common ones like THC and CBD, and uncommon cannabinoids.

The Clear Staff
Aug 1, 2022
Cannabinoids are a diverse class of plant-derived compounds with a vast array of unique effects, potential applications, and have been consumed by humans for centuries. Learn more about some of the common, and uncommon cannabinoids you may discover in a dispensary – including in products by The Clear!

Cannabinoids are a class of molecule defined by their interaction with cannabinoid receptors in the body. Those made by plants are called phyto-cannabinoids which can be found in the trichomes of a cannabis plant. These are the resinous glands or little beautiful crystals that coat the buds.

THC and Cannabidiol (CBD) are two of the most abundant cannabinoids found in cannabis.

These two cannabinoids work synergistically depending on the amounts taken. If a product has a larger concentration of CBD than THC, it can work to reduce the strength of the effects felt from THC. Conversely, If CBD is present in concentrations lower than that of THC, it can enhance the effects of both – known as the Entourage Effect. More on that later.

Endo-cannabinoids are cannabinoids made within the human body in response to external stimulation. These endocannabinoids work to help modulate the functionality of the Central Nervous System (CNS). Scientists have identified two main endo-cannabinoids: 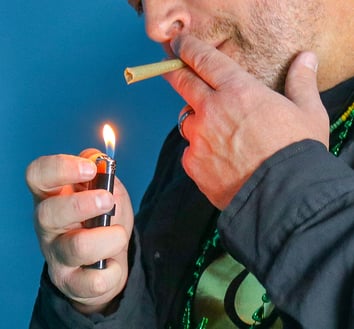 In its raw form, many of a cannabis plant’s cannabinoids are found in an acidic state. For example, Tetrahydracannabinoilic Acid (THCA) and Cannabidiolic Acid (CBDA) are both precursors to the THC and CBD molecules. THCA does not have psychoactive properties, so consuming THCA by itself you won’t lead to experiencing a high.

To ‘activate’ THCA and transform it into THC, heat must be applied, which is why traditionally people have smoked cannabis. Heat causes the THCA to decarboxylate, where the carboxyl group (what makes THCA acidic) is removed from the molecule.

If you’re wondering, The Clear cannabis oil is decarboxylated during our extraction and distillation process, so the cannabinoids are fully activated in products like our Elite, Classic, Endo cartridges and CBD products. 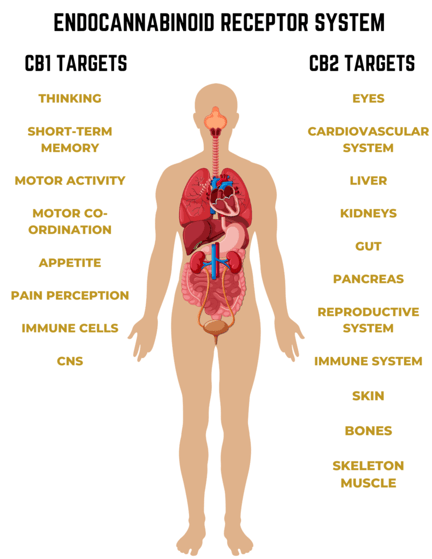 What’s interesting is that our bodies have receptors for cannabinoids in the Endocannabinoid Receptor System (ERS), that was just discovered in the early 1990s!

The ERS can be found throughout our bodies ­– in our brains, spines, even skin ­– and is an essential element for the maintenance of human functions. So far scientists know it plays a role in processes such as:

The ERS receptors respond to both phyto-cannabinoids and endo-cannabinoids. The main receptors are called CB1 and CB2 and are the most abundant receptors found throughout our bodies.

Now that we’ve defined what cannabinoids are, and how they work with our bodies, let’s talk about common and not so common cannabinoids. The table below includes reported effects of each. *

*Effects may vary depending on dosage and tolerance levels. The Clear makes no claims on the health benefits of cannabis.

Scientists are starting to conduct more scientific research into cannabinoids and their applications with more uses on the horizon. We do know that the FDA has approved two medications with cannabinoids – synthetic THC Marinol and Epidiolex, a formulated CBD.

It’s important to note that scientists have discovered that cannabinoids, terpenes and flavonoids can work synergistically. This means they work by enhancing or balancing the effects of each other when used in combination.

This phenomenon, called the Entourage Effect, was discovered by a group of scientists in 1998. It can explain why secondary cannabinoids like CBG, CBC and others influence the unique effects of each cannabis strain and euphoria from THC.

While THC and CBD are the most well-known and popular cannabinoids, research continues to identify minor cannabinoids, and studies are being conducted to further understand their interactions with the Endocannabinoid Receptor System.

Science and innovation are a part of our origin story and values at The Clear. Therefore, we hope this knowledge helps deepen your understanding of cannabinoids and cannabis products that may work best for you!

Research shows cannabis smoke being less harmful than tobacco smoke, but it can still cause irritation. What about vaping medical marijuana?

The endocannabinoid system helps cannabis produce therapeutic and psychoactive effects in people. How does the body react to cannabis?

Green and Clean from Seed to Concentrate

The Clear’s commitment to producing the most premium cannabis concentrate starts at the seed level. Green and clean from seed to extraction.

Get insights on The Clear and cannabis