“Edibles” in the cannabis industry refer to any food that has been infused with marijuana. Let's review traditional and fast-acting edibles and how they work.

“Edibles” in the cannabis industry refer to any food that has been infused with marijuana. These are exciting products you may find in a dispensary, or you can make your own.

Edibles are not new ­­­­– humans have been eating cannabis-infused food for centuries. One of the earliest cannabis edibles, discovered over 50,000 years ago, was a confection treat of rolled-up hash with spices and sweeteners discovered in modern-day Iran.

Today, there are a huge variety of different kinds of cannabis edibles, so we will review traditional and fast-acting edibles and how they work – including an introduction to The Clear’s distillate-infused fast-acting, vegan gummies, Dripcees™!

Traditional Edibles: Processed by the Liver

Modern cannabis chefs usually start by creating or buying a fat-soluble ingredient for the infusion, like butter or oil, to make foods like baked goods, chocolate or sweets. Edibles are consumed orally, meaning that traditional edibles typically undergo extensive processing in the stomach and liver. 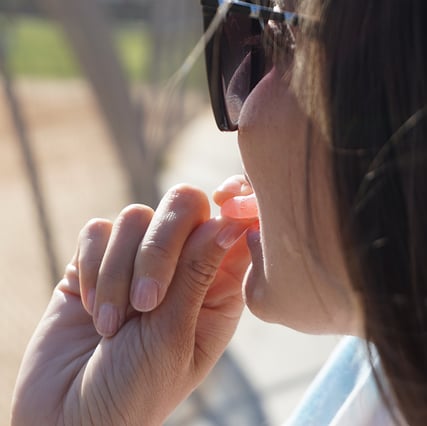 The liver takes cannabinoids and metabolizes them. THC is metabolized into 11-hydroxy-THC, a more potent molecule, so the perceived effects are stronger and longer lasting than other consumption methods. When consuming traditional edibles, the effects may not kick in for up to 1 hour and typically lasts up to 6 hours or more.

The reported psychoactive effects of THC edibles include euphoria and body relaxation. However, taking too much has been known to cause a feeling of anxiety, so it’s best to start with a low dose and wait until you feel the effects before taking more.

Gummies are one of the most popular forms of cannabis edibles found on the market today and possess a variety of different characteristics that make each gummy unique.

Many gummies are created using gelatin, a protein derived from the skin, bones, and connective tissues of livestock animals, which gives the gummies their chewy texture.

Fast-acting cannabis edibles are designed to work a little differently with your body, so you feel the effects much sooner than traditional edibles. This is because fast-acting technology enables cannabinoids to bypass initial metabolization by the liver, leading to a quicker onset of effects.

One common way of producing a fast-acting effect in edibles is by delivering cannabinoids in a nanoemulsion. Not only do edibles infused with cannabinoid nanoemulsions take effect more quickly, but the cannabinoids delivered using a nanoemulsion usually have a higher level of absorption or more bioavailability, and are more predictable.

Nanoemulsions encapsulate THC molecules in tiny droplets before they are ingested, allowing for the cannabinoids to easily bypass many metabolic functions and absorb directly into the circulatory system.

Another method of bypassing the liver involves encapsulating cannabinoids within cyclodextrins, a class of modified food starch commonly used to preserve flavors and aromas, that can also protect cannabinoids from the traditional metabolic pathway through the liver.

Cyclodextrins and nanoemulsions can both increase the overall water solubility of cannabinoids. This plays a large role in helping the cannabinoids to bypass the liver and makes the cannabinoids more likely to go directly into the circulatory system by being absorbed by the soft tissue in your mouth, esophagus, and stomach.

Smoking or vaping cannabis products allows cannabinoids to proceed directly into the circulatory system through the lungs, which is why the effects of edibles using these types of technologies are sometimes described as comparable to a ‘smoker’s high’.

From the company that brings you The Clear’s industry-leading vape and infused pre-roll products, Dripcees by The Clear are fast-acting, vegan gummies for the modern cannabis consumer. These unique gummies are infused using premium distillate and enriched with specific ratios of major and minor cannabinoids designed to provide unique experiences.

The Clear’s Dripcees gummies also feature Lipid In-vivo Transport (LIT), a special cannabinoid delivery system designed to improve how your body absorbs cannabinoids. LIT also provides a fast-acting experience with a boost to the bioavailability of the cannabinoids.

LIT is a part of our rapidly growing suite of proprietary cannabinoid-delivery technologies, as a part of our mission to personalize and improve upon the cannabis user's experience. With LIT, the effects from Dripcees m­­­­ay be felt in 15 minutes or less following consumption. 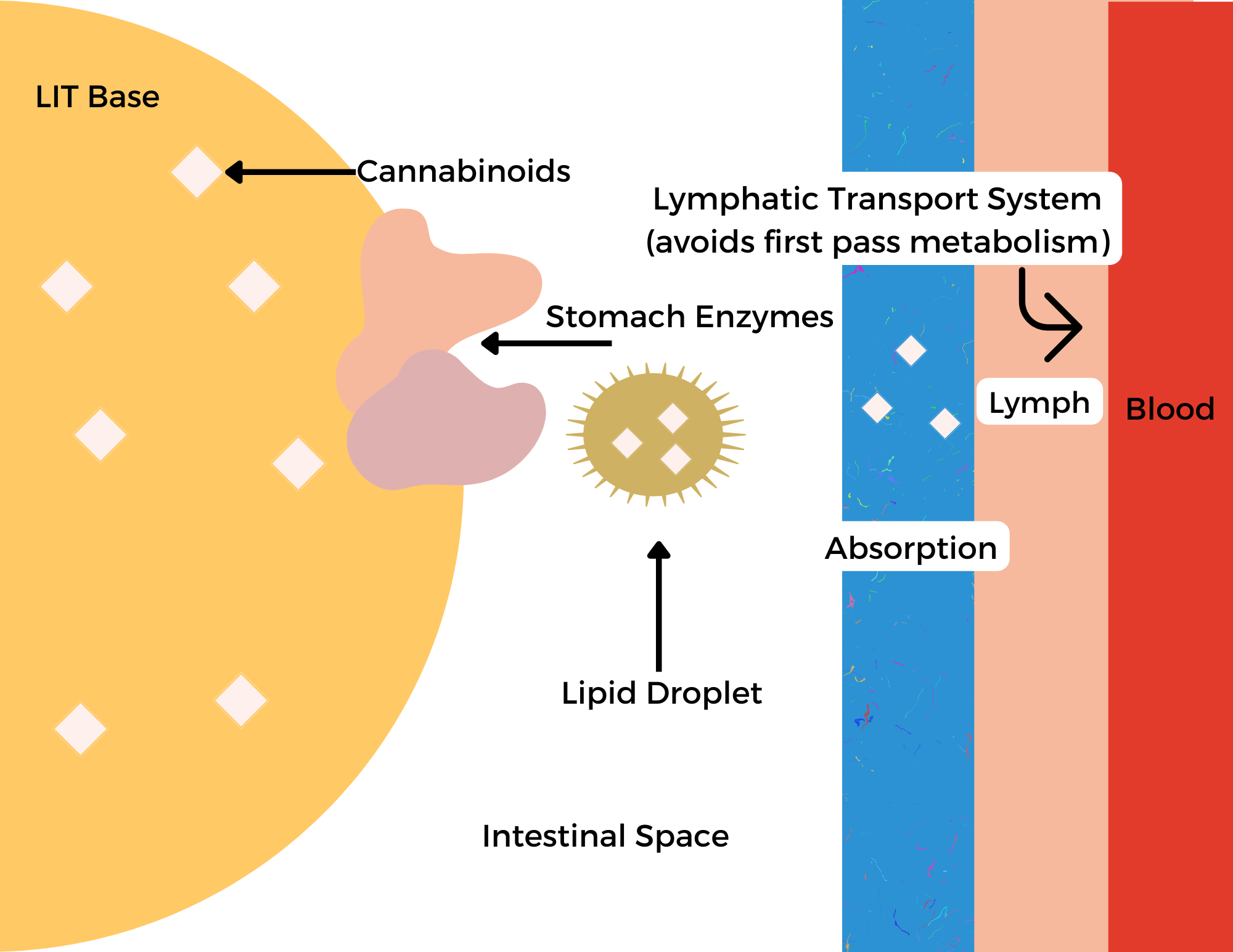 Let’s break down what LIT does. We are taking a lipid (a class of compounds that are fatty acids and insoluble in water) – in this case, cannabinoids - and using their unique properties to provide a different way for cannabinoids to be transported using your body’s natural processes.

Much like the nanoemulsions and cyclodextrin encapsulations, LIT is designed to help cannabinoids bypass the liver and avoid first-pass metabolism. In doing so, the goal is to increase the absorption rate and, as a result, the bioavailability of cannabinoids.

The ‘In-vivo’ part refers to the role that your body plays in leveraging the LIT system. In Latin, ‘in-vivo’ means “within the living”. This refers to the route where your body’s natural transportation system processes our fast-acting mixture, dissolves cannabinoids, and delivers it, via a lymphatic transport system, to your bloodstream to take effect.

Dripcees Gummies use non-synthetic all-natural flavors that are some of the top-ranked flavors in the cannabis edibles market and pair well with the cannabinoid ratios of the gummies. Dripcees are not only fast-acting, delicious, and easy to divide with scored lines in a unique Drip-C shape for microdosing. They are also plant-based with vegan ingredients of Agar and Locust Bean Gum and colored using all-natural plant extracts.

Whether you have tried cannabis edibles or not, these cannabis products are here to stay and The Clear is part of the evolution of edibles with our innovation of Dripcees. These non-traditional, personalized, delectable cannabis gummies provide a consistent experience, backed up by research, every time.

Dripcees Gummies are available at select dispensaries in Missouri soon, check our locations map to find a dispensary that carries this new and exciting product. If you work at a dispensary and would like to feature Dripcees in your shop contact us.

Let's talk about how parents can reduce the risk of kids getting into their cannabis. We will go over cannabis packaging, labels, safe storage, and...

Research shows cannabis smoke being less harmful than tobacco smoke, but it can still cause irritation. What about vaping medical marijuana?

What is Live Resin and The Clear's ENDO?

Live resin is a cannabis concentrate that is favored for its fresh aromas, tastes, and effects. Introducing ENDO – our live resin and distillate...

Get insights on The Clear and cannabis